This trek has been the mainstay attraction for trekkers to Nepal for many years. But road development has seen the trek shortened and high volumes of trekkers has seen the accommodation standard improve considerably. There’s still good reason to enjoy this trek though.

A masterplan for trekking in Nepal is posted here.

I’d like to re-visit Syange and take a third shot int his series below. The first shot was taken in 1984 and the second in 2000. The bridge has been replaced with a nice steel walkway. Some building has taken place and I think a road now passes by the village. This was the site of a bad egg for dinner in 1984. I departed the next morning feeling quite ill. I lost a lot of weight over the following week. 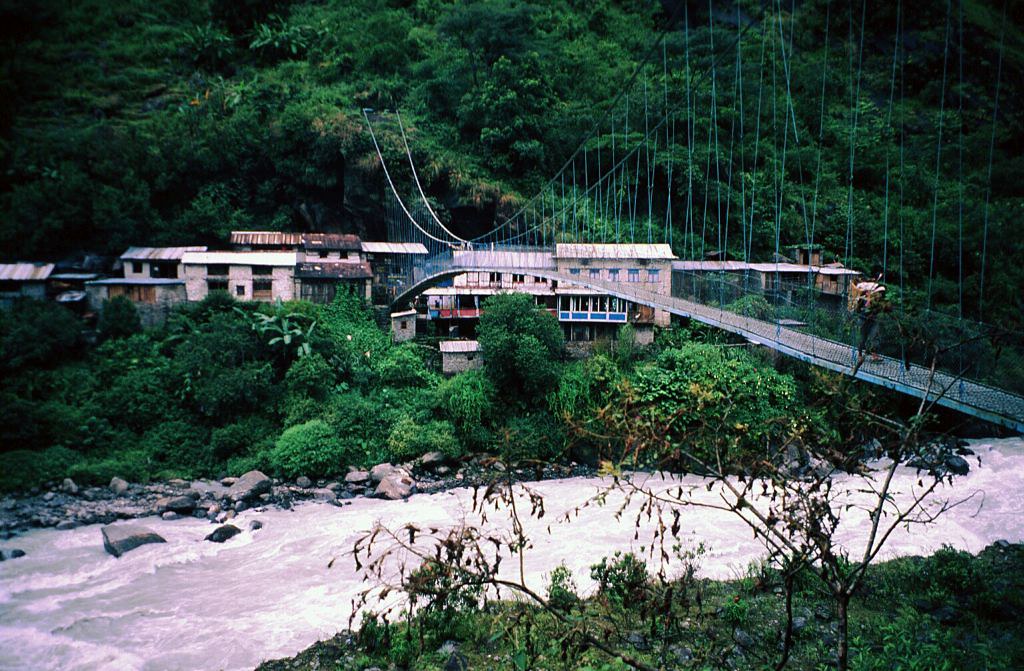 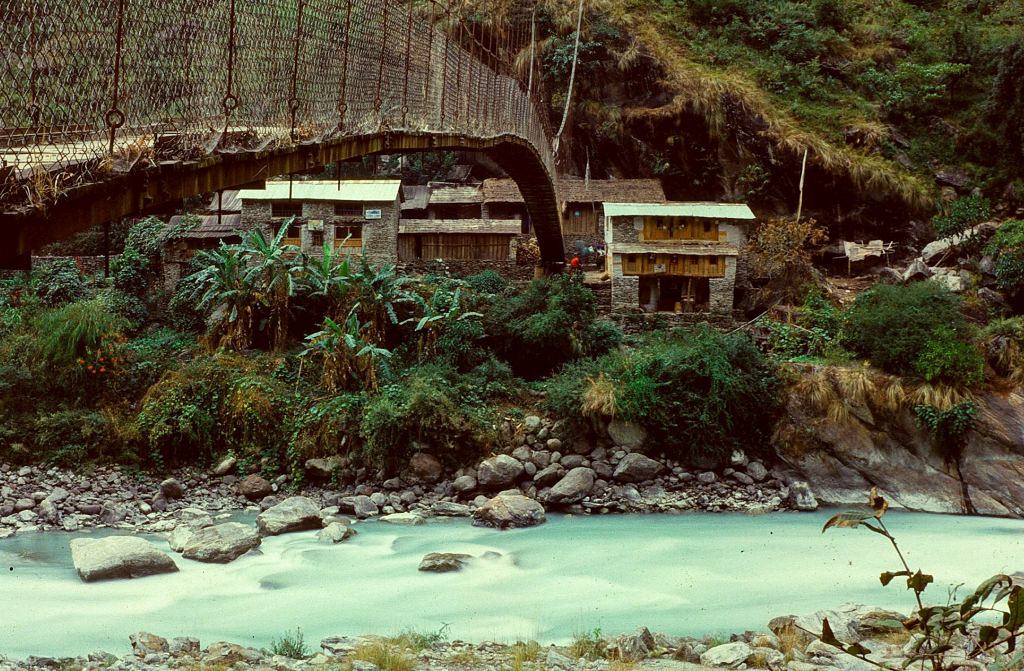 In both 1984 and 2000, for different reasons, I ended up flying back to Pokhara from Jomson. In 1984, the general opinion of this leg of the trek was that the tea houses and food were luxurious by comparison to the Manang side. I’m sure they were even better in 2000. But now, a trafficable road has been completed all the way to Jomson. This makes trekking less than completely pleasant unless you are walking away from the traffic. The second half of the trek this side, via Poon Hill is still walkers only. And the view from Poon Hill of the Annapurna range is quite spectacular at dawn. When you fly from Jomson, leaving on the first flight in the morning, the plane flies directly over Poon Hill and you can almost reach out and slap hands with the trekkers as you fly past them on Poon Hill.

See also the Around Manaslu trek and map

In 1984, there was no high camp, only a small building at Thorung Phedi. Many people just jammed themselves into this building sleeping side to side, head to toe before a very early morning start. You can now finish the day by trekking to the high camp. It’s a tough walk at the end of the day but makes the next day that much easier. Today you also have a tea house at Thorung La. This was not there in 2000.

The sky is a very dark blue when you walk over the pass. In 1984 I found the breathing very laboured. Walking in Dunlop Volley sandshoes through the snow was a case of always treading into the footsteps made before me. One porter suffered frostbite to his fingers and probably lost them. There was no snow in 2000.

Another comparison is the descent into Muktinath from Thorung La. I manufactured a shot in 2000 similar to the one in 1984. There has been substantial erosion on the valley floor in the intervening period but more local rains in the immediate period has resulted in more trees on the plateaus. 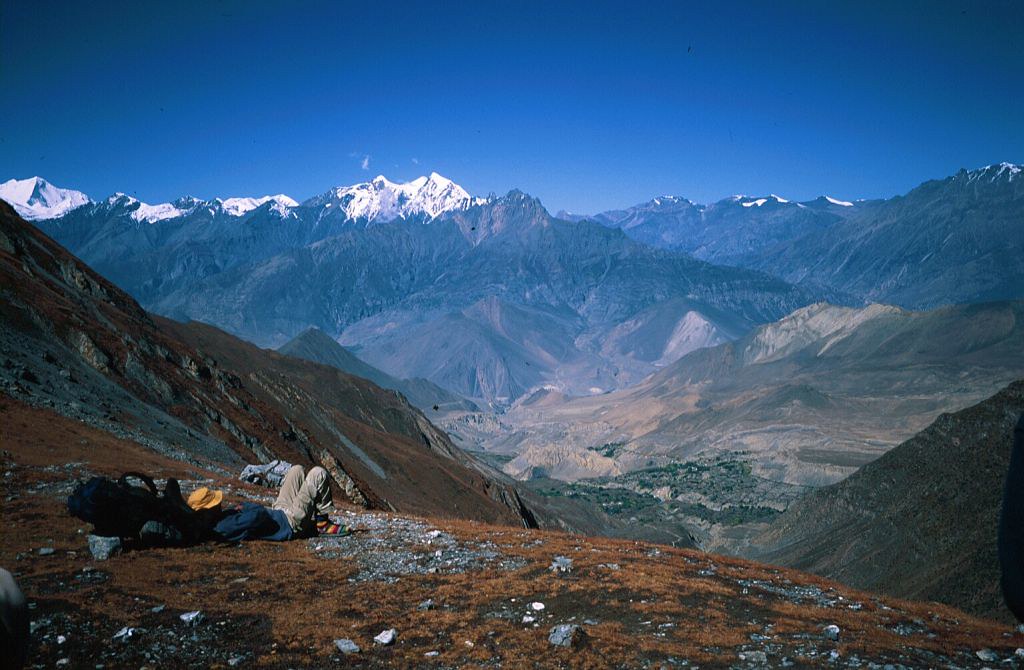 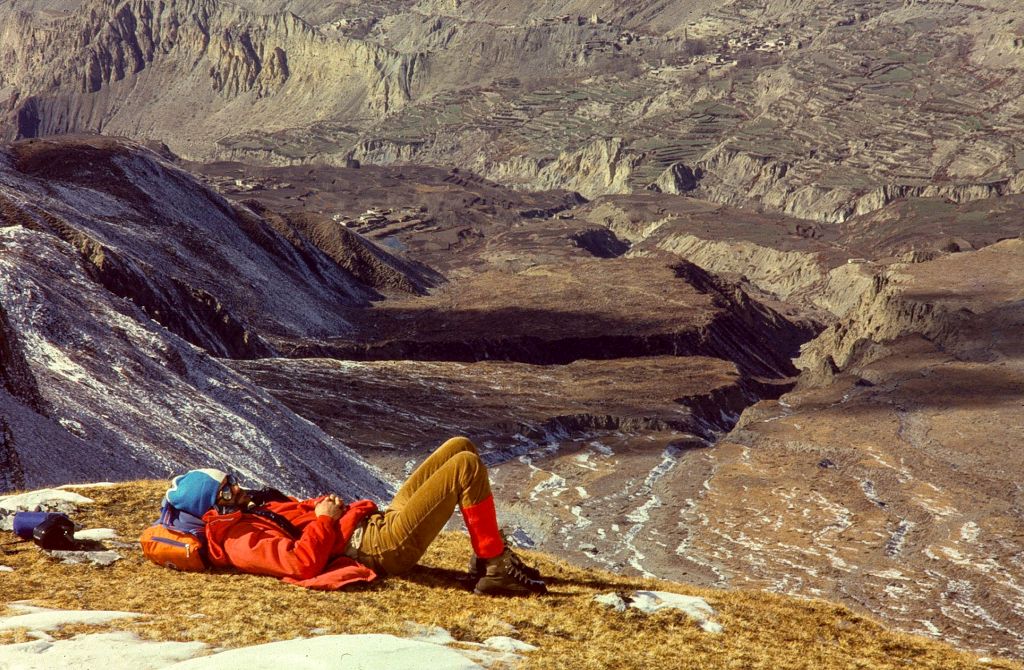 From here, it’s on the Kagbeni and Upper Mustang